Skin, by Ted Dekker- A Review 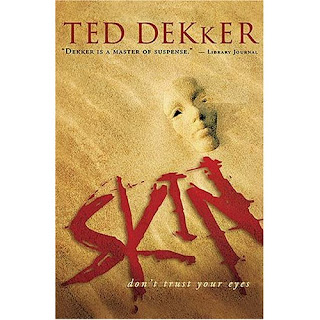 This morning, I finished reading Ted Dekker's new book, Skin. I can't say much about the book without giving stuff away, as with all of Ted Dekker's books, so I'll try not to spoil it for anyone. But this story was really, really good! :D

Here's the back cover copy as an overview:
"A freak storm has spawned three tornados that are bearing down on the town of Summerville.
"Yet under the cover of the storm looms a much more ominous threat: A vindictive killer known as Red who's left a string of victims in his wake and is now bent on exacting his revenge on the unsuspecting town.
"But there is an enigma surrounding Red that the FBI is unwilling to admit--closely guarded secrets of something gone terribly wrong beneath the skin of Summerville. Secrets that will destroy far more than one small town.
"Wendy Davidson is caught in the middle. She's a recovering cult survivor who takes refuge in Summerville on her way to visit her estranged mother. And with her, four strangers, any one of whom could be the next victim...
"...or the killer."

I like to save the best for last, so I'll talk about the weaknesses first.

Weaknesses:
The beginning of this book reminded me a bit of Showdown and House, two other books Ted Dekker has written/co-written with Frank Peretti. The premise is once again a killer who wants the other characters to kill each other. In Skin, Red demands that the five main characters kill the ugliest among them. For every day that they delay, he kills seven townspeople.

Another weakness, is I found some mistakes in the writing that really distracted and/or confused me. The biggest mistake that tripped me up is when the story is in Blair's point-of-view and he's on the phone with Clifton. Then, Clifton hangs up with Blair, and suddenly, with no indication of a POV change, the story goes into Luke's POV. I didn't notice the word "Luke" at first, and I was very confused as to why Blair was thinking this way. I didn't realize what was going on until I got to the end of the page and had to go back because I was so lost. That's when I saw the word "Luke" instead of "Blair." That was the main mistake. There were a few minor things here and there, but not too many.

A third weakness: it was kind of gross in places. But I've learned to somewhat expect that from Ted Dekker. :) Plus, the grossness serves its purpose: to show the ugliness of evil and sin.

Strengths:
This book delivered what I love about Ted Dekker's books: plenty of suspense. Toward the end of the book, I was so into it that my heart rate had risen fairly high, I was sweating, and I couldn't put the book down.

Dekker had some great twists that I never saw coming! :) Which is great, because I was afraid I had gotten to the point where I could somewhat guess where he was going. But these were totally unexpected. And, just when I thought it was all over and I could (somewhat) relax, he pulled the biggest twist of all! I'm still going back and reading to find the clues and try to figure this thing out! It's great! :)

You can buy the book on Amazon.com. You can also check out Ted Dekker's website and learn more about Ted Dekker and his books. Have fun! :D