Quotes of the Week #5- Movie Heros

1. It must often be so, Sam, when things are in danger: someone must give them up, lose them, so that others may keep them.
-Frodo, from The Return of the King

2. Never. I'll never turn to the Dark Side. You've failed, your highness. I am a Jedi, like my father before me.
-Luke Skywalker, from The Return of the Jedi

3. As you wish.
-Westley, from the Princess Bride

5. Sometimes, to do what's right, we have to be steady and give up the thing we want the most. Even our dreams.
-Peter Parker, from Spider-Man 2

Your Highness, my family is your family. Please, take them away.
-Danielle, from Ever After

What do you fear, my lady?

A cage. To stay behind bars until use and old age accept them and all chance of valor has gone beyond recall or desire.

You are a daughter of kings, a shieldmaiden of Rohan. I do not think that will be your fate.

-Aragorn and Eowyn, from The Two Towers

Quotes of the Week #4- Movie Villains

This week all quotes, except the random one, are things movie villains have said. Since I missed two weeks due to a vacation, I have included ten quotes instead of the usual five. Next week, the subject will be movie hero quotes. Enjoy! :)

3. And once I turn back into my beautiful self I'm going to kill you.
-Yzma, from The Emperor’s New Groove

4. We wants it, we needs it. Must have the precious. They stole it from us. Sneaky little hobbitses. Wicked, tricksy, false!
-Gollum, from The Two Towers

5. First, your return to shore was not part of our negotiations nor our agreement, so I must do nothin'. And secondly, you must be a pirate for the Pirate's Code to apply, and you're not. And thirdly, the Code is more what you'd call "guidelines" than actual rules. Welcome aboard the Black Pearl, Miss Turner.
-Barbossa, from Pirates of the Caribbean: The Curse of the Black Pearl

7. Mr. Anderson... you disappoint me.
-Agent Smith, from The Matrix


8. Why don't you sleep with the pigs, cindersoot, if you insist on smelling like one.
-Marguerite, from Ever After

9. As I told you, it would be absolutely, totally, and in all other ways inconceivable.
-Vizzini, from The Princess Bride

10. I'm disinclined to acquiesce to your request... Means "no."
-Barbossa, from Pirates of the Caribbean: The Curse of the Black Pearl 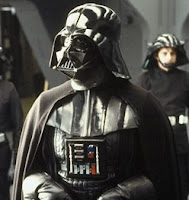 Luke, I am your father.
-Darth Vader, from The Empire Strikes Back 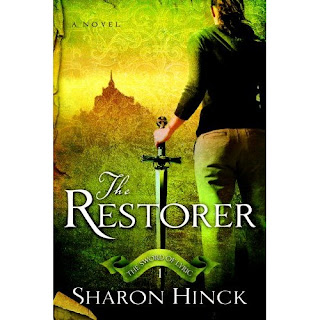 This month, the CSFF Blog Tour is featuring Sharon Hinck's new fantasy book The Restorer! I'm really excited, because I love this book! And Sharon Hinck is awesome! I met her at the Mount Hermon Writers Conference, and she's a wonderful, sweet, and friendly person! :) You can visit Sharon Hinck's website or Sharon Hinck's blog to get to know her!

Of the different summaries I've read, the summary on the bookmarks is my favorite. It reads:

Susan, a modern-day soccer mom, is pulled through a portal into another world, where a nation grappling for its soul waits for a promised Restorer to save their people. Can she fill that role? While she struggles to adapt to a foreign culture, she tackles an enemy that is poisoning the minds of the people, uncovers a corrupt ruling Council, and learns that God can use even her floundering attempts at service in surprising ways.

Weaknesses? What weaknesses? Okay. :( I found one typo. :P I don’t remember what page it was on, but the word “a” was left out of a sentence. One tiny typo is pretty good for a 455-word book.

Another weakness: there wasn’t enough of Kieran in the book. LOL! :P

Okay, seriously. The one thing in the book that bothered me was it felt…oh wait, I can’t say that because it will give something away. Hmmm…how can I say this? Two particular characters seemed to constantly hug and kiss one another when they were anywhere near each other. How did I do? Did I give anything away? :) I know that’s technically not a weakness, but it got a little old for me. If you’ve read the book, you probably know which two characters I mean. :) If you haven’t read it, then you really should do so. :)

Where do I start? :) The world of The Restorer is a very new and fresh one, and it’s very exciting to explore. The races, especially the Rhusicans and Kahlarean assassins, were original and interesting. Even the architecture of The Restorer’s world is unique, and Sharon did an excellent job of describing it. The culture and its beliefs, customs, traditions, etc. were developed well.

The characters are great! My personal favorites would be: Susan, Tristan, Wade, and of course, Kieran. :D All of the characters have depth and are fun to read about.

The Restorer moves at a fast pace and is very involving. I could hardly put it down during the two days that I was reading it. My mind was always on it and I kept the book almost constantly at my side so I could sneak little reads in whenever I was given the chance.

I’m adding this book to my list of favorites! It’s excellent! :)

Go on an adventure and find out what other members of the CSFF Blog Tour are saying about The Restorer! The portals to their blogs can be found below:

You can also read my thoughts on The Restorer that I posted right after I read it: The Writer's Sword- The Restorer First Reactions

It's about a banished War Bard who is taken captive by her enemies. In this world, singing is used as a weapon, and those who are powerful can control their opponents' bodies.

R.A. Gale's description of the singing is wonderful and engaging! Especially as a singer, I could almost feel what she was describing. I found myself wanting to break out in song at the most climatic moments. :D

And the climatic moments were very well done. The tension was excellent! I was completely in the story, and nothing was going to get me out. :)

I very highly recommend "Singing for the Enemy" to anyone. It's great for fantasy readers, singers, adventure readers, or anyone else. :) If you only read one story on The Sword Review, read this one! It's that good!

Quotes of the Week #3- Writing

1. Writing is an exploration. You start from nothing and learn as you go.
-E.L. Doctorow

2. Writing and reading is to me synonymous with existing.
-Gertrude Stein

3. When writing a novel a writer should create living people; people not characters.
-Ernest Hemingway

5. Writing is the only thing that, when I do it, I don't feel I should be doing something else.
-Gloria Steinem

Humorous Quote:
Writing is a socially acceptable form of schizophrenia.
-E.L. Doctorow
Posted by Becca Johnson at 10:18 AM 2 comments: