This week's quotes are about life and its lessons, joys, and courage. Quotes #1 and #5 are particularly good! :D

1. Life is either a daring adventure or nothing.
-Helen Keller

2. This process of the good life is not, I am convinced, a life for the faint-hearted. It involves the stretching and growing of becoming more and more of one's potentialities. It involves the courage to be. It means launching oneself fully into the stream of life.
-Carl Rogers

3. Today is a new day. You will get out of it just what you put into it.... If you have made mistakes, even serious mistakes, there is always another chance for you. And supposing you have tried and failed again and again, you may have a fresh start any moment you choose, for this thing that we call "failure" is not the falling down, but the STAYING DOWN.
-Mary Pickford

4. Is life not full of opportunities for learning love? Every man and woman every day has a thousand of them. The world is not a playground; it is a schoolroom. Life is not a holiday, but an education. And the one eternal lesson for us all is how better we can love.
-Henry Drummond

5. Upon a life I did not live, upon a death I did not die; another’s life, another’s death, I stake my whole eternity.
-Horatius Bonar

I don't mind it when my guests write their names on the furniture in the house dust, I just don't like it when they date their signatures!
-Phyllis Diller

This is what I've learned: that everybody is talented, original, and has something important to say.
-Brenda Ueland

Quotes of the Week #14- Paper Scraps

This week, I'm using the quotes I have lying all around my room on different scraps of paper. Some have been given to me, others I've found somewhere. They lay hidden under some notebook or between the pages of a journal until I stumble upon them while looking for something or cleaning. They're like little treasures or jewels that I've sprinkled about my room to find just when I need them. Surprise gifts to myself. And today, I've decided to share some of them with you. So whether you stumbled upon them or came looking for them, may they bring you inspiration and revelation. :)

1. Not everyone possesses boundless energy or a conspicuous talent. We are not equally blessed with great intellect or physical beauty or emotional strength. But we have all been given the same ability to be faithful.
-Gigi Graham Tchividjian

2. Hope has two beautiful daughters. Their names are anger and courage; anger at the way things are, and courage to see that they do not remain the way they are.
-Augustine

4. God forgave us without any merit on our part; therefore we must forgive others, whether or not we think they merit it.
-Lehman Strauss

5. Be careful of the words you say
Keep them soft and sweet
You never know from day to day
Which one's you'll have to eat.
-Unknown

6. "..., to be an honest man is not easy, but I fear that is what I am. It is an affliction of mine that tries me sorely. Yet . . . what can a man do? I want only what is mine, and not to trade upon the happiness or unhappiness of others."
Louis L'Amour in Fair Blows the Wind

Going to church doesn't make you a Christian any more than going to the garage makes you a car.
-Laurence J. Peter

Take joy in the adventure!

CSFF Blog Tour- Review of The Return by Austin Boyd 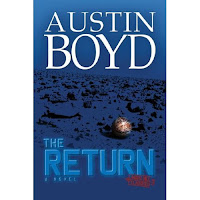 Today is the second day of the CSFF Blog Tour featuring Austin Boyd's The Return, the third book in the Mars Hill Classified series. My mother agreed to review The Return, one of her favorite books. So without further delay, here is her review:

In The Return, Johns Wells is once again on his way to Mars. Believing his family killed in a terrorist attack, there is nothing left to hold him on earth. Wells and his team are sent to the Red Planet to finally solve the mystery of whether there is life on Mars. On this long journey their beliefs are challenged and their characters tested. This book answers the questions we were left with after reading the first two books.

The Mars Hill Classified series has had me on tether hooks from the beginning and I could not wait for each one’s release. Unfortunately, I had to wait for my husband to finish with The Return before I could start it since I had promised to let him read it first.

Austin is able to use his experience and education to tell a story without leaving the reader confused. He does not write in a way that the technical information is way over his audience’s head.

He places his characters in situations where they face the same struggles we do and yet does not allow them to find the easy way out. We can empathize with them because we have been there too. I think he did a great job with the Christian message not being the focus of his story and yet still very present.

If you are a reader of speculative fiction, or just enjoy good writing, I highly recommend this book. It is a great book to give to your husband, but wait until you have finished it first or you won’t get it back.

Boyd has forever changed how I look at space exploration and raised many questions about alien life. I am looking forward to his next series. I wish he would hurry.

Please take some time to visit Austin Boyd's website, along with a few of the other blogs participating in the CSFF Blog Tour.

Take joy in the adventure, and give your mom a hug!

Quotes of the Week #13- Worship

The focus of this week's quotes is worship. I didn't find a humorous quote this week, but the other quotes more than make up for its absence. :)

May you be inspired!

1. As long as you notice, and have to count the steps, you are not yet dancing but only learning to dance. A good shoe is a shoe you don't notice. Good reading becomes possible when you need not conciously think about eyes, or light, or print, or spelling. The perfect church service would be the one we were almost unaware of; our attention would have been on God.
-C.S. Lewis

2. It is not enough for us to be where God is worshipped, if we do not ourselves worship him, and that not with bodily exercise only, which profits little, but with the heart.
-Matthew Henry

3. A man can no more diminish God's glory by refusing to worship Him than a lunatic can put out the sun by scribbling the word, 'darkness' on the walls of his cell.
-C.S. Lewis

5. The most valuable thing the Pslams do for me is to express that same delight in God which made David dance.
-C.S. Lewis

Intoxicated with unbroken success, we have become too self sufficient to feel the necessity of redeeming and preserving grace, too proud to pray to the God that made us.
-Abraham Lincoln

Take joy in the adventure!

Quotes of the Week #12- Writing and Stories

Because I've found so many great quotes on writing, I've decided to include ten quotes this week instead of the usual five. I've also included an extra humorous quote. Enjoy! :D

1. Every man's life is a fairytale written by God's fingers.
-Hans Christian Anderson

2. Even in literature and art, no man who bothers about originality will ever be original: whereas if you simply try to tell the truth (without caring twopence how often it has been told before) you will, nine times out of ten, become original without ever having noticed it.
-C. S. Lewis

3. I write for the same reason I breathe - because if I didn't, I would die.
-Isaac Asimov

4. Words, once they are printed, have a life of their own.
-Carol Burnett

5. I am a galley slave to pen and ink.
-Honore de Balzac

6. To anyone who knows a writer, never underestimate the power of your encouragement.
-Matthew Reilly

7. If you wait for inspiration, you're not a writer, but a waiter.
-Anonymous

8. A wonderous dream, a fantasy incarnate, fiction completes us, mutilated beings burdened with the awful dichotomy of having only one life and the ability to desire a thousand.
-Mario Vargas Llosa

9. Some things can only be said in fiction, but that doesn't mean they aren't true.
-Aaron Latham

10. Beneath the rule of men entirely great,
The pen is mightier than the sword.
-Edward Bulwer-Lytton

I once heard a fellow novelist call writing 'successful schizophrenia'--we invent people and worlds that don't exist; but instead of being medicated, we are paid for it.
-Jodi Picoult

If you are in difficulties with a book, try the element of surprise: attack it in an hour when it isn't expecting it.
-H.G. Wells

"But that's not the way of it with the tales that really mattered, or the ones that stay in the mind. Folk seem to have been just landed in them, usually--their paths were laid that way, as you put it. But I expect they had lots of chances, like us, of turning back, only they didn't. And if they had, we shouldn't know, because they'd have been forgotten. We hear about those as just went on--and not all to a good end, mind you; at least not to what folk inside a story and not outside it call a good end. You know, coming home, and finding things all right, though not quite the same--like old Mr. Bilbo. But those aren't always the best tales to hear, though they may be the best tales to get landed in! I wonder what sort of a tale we've fallen into?"
-Sam, from The Two Towers, by J.R.R. Tolkien

Happy adventures, and trust the Author of our lives for His perfect ending!

Quotes of the Week #11- Virtue

1. We make men without chests and expect of them virtue and enterprise. We laugh at honor and are shocked to find traitors in our midst.
-C.S. Lewis

2. No virtue can be great if it is not constant.
-Alfonso Milagro

3. Character is made up of small duties faithfully performed--of self-denials, of self-sacrifices, of kindly acts of love and duty.
-Anonymous

4. Very often what God first helps us towards is not the virtue itself but just this power of always trying again.
-C.S. Lewis

Being virtuous is no feat once temptation ceases."
-Arnold Glasow

We have a God who delights in impossibilities.
-Billy Sunday