Merciless by Robin Parrish, Third in the Dominion Trilogy 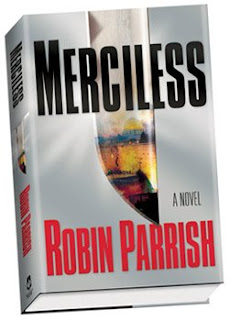 I read Merciless, the third in Robin Parrish's Dominion Trilogy a month or so ago. It was a pretty good book, though I preferred the first two in the trilogy (Relentless and Fearless) better.

The Earth is gone.

Rising in its place is a twisted, barren, dangerous world.

Deep beneath the mountains of Turkey, Grant Borrows has fallen to his doom. But when something crawls out of the place where he fell -- something dark and merciless with unrestrained power -- it proclaims itself "Oblivion" and begins molding the planet into this DarkWorld.

But who or what is Oblivion? Is it Grant Borrows, returned from the dead? Or is it something more sinister -- something no human ever imagined possible?

As Grant's remaining friends finally learn the ultimate truth behind the events that have shaped their lives, they secretly gather for one last battle -- a final showdown between good and evil that will prove to every soul on earth that even in the bitterest twilight, when all is lost...

Weaknesses:
-This book was filled with a lot of darkness, and very little hope. There is hope from time to time, but sometimes it's hard to find.
-I think I found more grammar mistakes and typos.

Strengths:
-The battle at the end of the book was really good. It had a lot of action, was interesting, and the different ways characters' powers could be used was well thought out.
-Speaking of that, I loved watching the different ways the author came up with for the characters to use their powers. Not only that, but sometimes two or more characters were used together in ways that were cool or creative.
-I knew something was going on at the end, but I wasn't quite sure how it would work out. I can't say much more without giving the surprise away, but I think the author managed to write a good one.

Once again, I recommend this book to people who like lots of action, superhero characters, and speculative fiction in general. Just make sure the darkness in the book doesn't get you depressed or feeling hopeless about the ending of the trilogy. There is hope. :)

So, you might have noticed that the fantasy novel progress changed (it's over on the right). That's because I started a new story that I like much better. In fact, it's not fantasy now. It's more science fiction. College has been keeping me from writing much of it recently, which is depressing, but I plan getting back to it during break and writing a lot. I hope that works out.

The story interests me more, the characters feel more real to me, and I actually have a general plan for where this story is going. Toward the end of writing my other story, I realized it had some serious flaws. I'll go back and fix it later, but it will take a serious rewrite, and I wanted to try something new.

I'll try to post updates now and then on how this new novel is going. :)

Quotes of the Week #18: Artemis Fowl

I'm working on getting my blog going again, and I was told that my weekly quotes were sorely missed. So, today, I'm treating you to Artemis Fowl (by Eoin Colfer) quotes. :D

1. "Don't look directly at the screen. It's bad for my skin."
-Opal Koboi, from The Opal Deception

3. "A CD. How quaint. We have these in museums."
-Holly Short, from The Eternity Code

4. "Oh, brilliant. I must write that one down in my witty retorts book."
-Mulch Diggums, from The Lost Colony

5. "I never tell anybody exactly how clever I am. They would be too scared."
-Artemis Fowl, from The Eternity Code

"When are you going to learn, Mud Boy? Your little schemes have a tendency to get people hurt. Usually the people who care about you."
-Holly Short, from The Eternity Code

And now off to scheming. :P

This month, the CSFF Blog Tour is featuring Jeffrey Overstreet's Auralia's Colors, the first book and Red Strand in the Auralia Thread.

Cloaked in mystery, Auralia grows up among criminals outside the walls of House Abascar, where vicious beastmen lurk in shadow. There, she discovers an unsettling--and forbidden--talent for crafting colors that enchant all who behold them, including Abascar's hard-hearted king, an exiled wizard, and a prince who keeps dangerous secrets.

Auralia's gift opens doors from the palace to the dungeons, setting the stage for violent and miraculous change in the great houses of the Expanse.

-Too many points-of-view. The large amount of points-of-view was disorienting and frustrating. I felt like I barely got to know any of the characters, and it was difficult to even determine who the book was about. This really hurt my enjoyment of the book, especially since characters are the most important part of a book for me.

-Seems to wander a bit. I wasn't sure what the plot would turn out being, though it did pick up toward the end of the book. I would have appreciated more conflict or more obvious direction to the plot.

-Eventual interest in some of the characters, particularly Auralia, the ale boy, and Prince Cal-raven. However, it took more than half of the book before this happened for me.

-Some beautiful, almost poetic setting descriptions. The book is rich in detail and colors (no pun intended). There are plenty of passages like this spread throughout the book, and many of them would be worth reading again for their beauty and the wonderful way the words flow together.

Two-thirds of My Novel Completed!

I've completed two-thirds of the rough draft of my WIP (work-in-progress) as of tonight! I'm very excited! :D I can't wait to announce the completion on here. What a celebration that will be! Thank you for celebrating all the important milestones with me. It's quite a thrill to watch this story finally happen. :)

Writing on to the great novel ending,
In Him,
Becca Johnson
Posted by Becca Johnson at 2:03 AM 5 comments: