The Restorer's Journey by Sharon Hinck 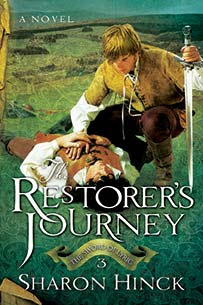 I just finished reading The Restorer's Journey by Sharon Hinck. I can't believe I waited this long to read it. It was great, and I had been missing out.

This is the third book in The Sword of Lyric trilogy. I reviewed the first book here. Unfortunately, I never reviewed the second book, The Restorer's Son, after I read it. It's especially unfortunate since that was my favorite book. It has Kieran, my favorite character, as the main character. But I read it too long ago for me to go back and review it now. I don't trust my memory that much. However, I do trust it enough to tell you that it was a very good book and that I recommend it.

So, back to The Restorer's Journey. This book's main character is Jake, Susan's son. However, it still follows Susan's journey (just like in the other two books) and there are some chapters in her point of view. Here's a summary I found on Sharon Hinck's website:

The world he knew is gone.

Confident in his new Restorer signs, Jake crosses the portal into Lyric to stage a heroic rescue. But everything has changed.

Jake is forced to confront hostile friends, the mental control of a corrupt king, and deadly lies that have claimed the clans. His path leads him to alliances with outlaws, dire battles, and even the temptation to forsake his calling.

Susan faces her own battles as she struggles to survive a brutal captivity. Can she find freedom before enemies destroy her spirit? Will Jake’s choices save the clans or lead to her death?

Weaknesses:
-I didn't feel like I connected with Jake as much as I had with the previous two main characters (Susan and Kieran), at least not at first. That doesn't mean I didn't like him, he just didn't seem as strong of a character in the beginning.

-There's one moment in the book where I'm curious how one of the characters knew what was going to happen so that they could plan it the way they did. I can't say more without giving something major away. And maybe there's an explanation I haven't thought of yet, but it just made me wonder.

-My favorite character was only mentioned a few times. :( He never showed up in person. But that's my own silly complaint. :P

Reflection in the middle:
This next thing isn't really a weakness. I thought it was at first, but it actually turned out to be a strength. So I'm sticking it here in the middle.

I started really enjoying the book once Jake started following God's plan for his journey. The book was a little frustrating up until that point. But now that I've finished the book and looked back on it, I guess that makes sense. Of course things would be frustrating when he wasn't where God wanted him to be. So this is the weakness that turned into a strength...wait a second. That sounds familiar. :P ;)

Strengths:
-Sharon Hinck did a great job of portraying God's love and guidance in His children's lives. It felt very personal and not at all preachy. Watching how He guided and spoke to the characters reminded me of how close He wants to be to us, how active He wants to be in our lives, and how even when His plan sounds crazy, it's really the only sane way to go. Great reminders!

-The world this story takes place in is very original. Even the atmosphere and weather is very different from our own, but not so weird that it's difficult to imagine. The world has its own creatures, Verses, cultures, and peoples. And it's a world I enjoyed going back to visit again.

-There's some good action in this book. There are lots of sword fights and battles that are described well, but that don't get unnecessarily gory. I never got bored with the book, even when there weren't fights going on. It held my attention throughout.

-The song that Jake wrote is in the back of the book, along with the music so that a musician could play it. I plan to try it out tomorrow on the piano. I love it that Sharon Hinck includes music in these books. :D

Overall:
I really liked this book, and I think you will too. I think it would appeal to all ages and both genders, since it has both a teenage boy and a mom as main characters. Besides, Sharon Hinck did a good job of appealing to everyone even when all she had was the mom as the main character. You should go and buy The Restorer's Journey (and the two books before it) right away so you can get lost in the adventure and wonder too. That's what I think. :)

Here's a last glimpse of the covers of the first two books to get you even more interested:

This is one of my favorite series. I did not want it to end. It is definitely on my read-again list.