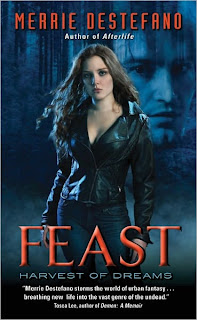 Feast by Merrie Destefano is about Maddie, an author who goes to the woods of Ticonderoga Falls to rediscover her inspiration, and Ash, the Darkling who rules there and lives off of the dreams of humans. The Harvest is coming, and both of their lives and the town itself will be threatened by a darkness intent on enslaving or destroying them all.

Feast's plot was tight and well-constructed. Everything happened for a specific purpose, and as the book progressed, the reasons for certain events or details that had seemed insignificant became evident. There was a particularly brilliant moment in the plot which I will discuss in further detail later in this review. When I read that scene, I got so excited that I could barely contain myself. That happens when I find in stories echoes of the Greatest Story.

The characters felt real, and it was fun to get to see things from so many of their perspectives. My favorites were Ash, Maddie, Ross, and Joe. But it was hard to choose favorites, because I liked all of them a lot. They all had unique perspectives and it was cool to see how they thought and to see their varying views on situations. Even the villain’s point of view was enjoyable and not obnoxious like they can be in some books. Merrie Destefano did a great job with her characters.

I had only two small complaints about the book. The first is that there was no explanation for how Ross and Sienna came to like each other. First Ross was terrified of her, and then they were acting like old friends at the end of the book. I would have liked to see what changed his attitude toward her. The only other complaint I had was that the characters would sometimes know names of things or information without first learning about the names or information. But that didn’t happen too often.

This paragraph has spoilers, so read it at your own risk. If you don’t want spoilers, skip ahead to the next paragraph. I liked how Ash's bitterness and desire for revenge were taken from him as the villain was killing him. And I loved what the Legend was whispering then. It reminded me of how God can take something meant for terrible evil and make something amazingly good come out of it. And He knows that it is a joyful thing that will come to pass in our story, even though we don’t understand. That's the part of the book that got me so excited. And now the spoilers are over.

Merrie Destefano does a great job of creating atmosphere through her choice of words. She painted scenes that carried strong senses of beauty, darkness, foreboding, or joy. Her words are lovely and powerful. Sometimes I would read a passage a second time just so I could experience again the atmosphere it held.

Here are some of my favorite descriptions from Feast.

“Leaves, soggy and heavy, muddled to the ground, broken mementos of the narrow bridge between summer and winter.”

“All of her thoughts were being built and fashioned from the ether, fog swirling in tempestuous roiling eddies, patterns that morphed and growled, a womb of cloud and idea that was giving birth as she walked.”

Feast is a beautiful, exciting read, and I recommend it to readers of fantasy and to lovers of words and legend.