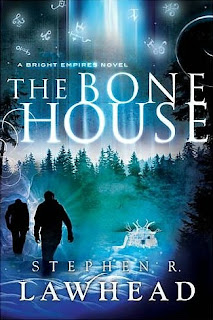 The Bone House continues to follow the stories of the characters we met in The Skin Map, and it also introduces a few new characters. Kit, Mina, and Giles are on the run from Burleigh and his henchmen, Arthur Flinders-Petrie is traveling through ancient worlds with his wife, and Douglas is working to unravel the secrets of the skin map. As these characters travel from one dimension to another using ley lines, they meet historical figures from many different times and places. Befriending these historical people and manipulating events throughout the multiverse, they further themselves in the race to find the skin map and the fantastic secret it holds.

What impressed me most while reading this novel was Lawhead's ability to jump back and forth in various characters' timelines and yet not confuse the reader. I knew what was going on and never got lost. The fact that he was able to write that way and avoid any contradictions or confusion shows what a talented author he is. And I think the shifts along the characters' timelines actually made the book more interesting to read. Plus, it mirrored how the characters themselves were not fixed in any one time or place. I think Lawhead's choice to tell the story in a nonlinear fashion was brilliant.

Unfortunately, I noticed at least one time where the author contradicted himself on a smaller issue. In one scene, Mina hands something to Kit, but then he asks her for it and she passes it to him again. While this is a minor mistake, it did pull me out of the story for a moment and could have been fixed with a little editing.

I felt that the characters were stronger in this second book of the series. I empathized with all of them now, and they all felt distinct in their personalities. Mina is still my favorite character, but now I really like Kit and Arthur as well. And the minor characters, such as Turms and Thomas Young (my two favorites in this category), were just as fascinating and unique as the main characters. No matter which group of people a particular chapter was following, I was always excited to find out what was happening in their lives.

Another fun thing about this book was that it visited so many times and places in the world. I love history, so I enjoyed reading about every reality the characters traveled to. Often, something in the story would ignite my curiosity, and soon I'd be exploring an encyclopedia, learning more about the interesting people, places, and cultures. Books are so fun when they integrate history as part of a story or myth.

I greatly enjoyed The Bone House and would recommend it to anyone who likes science fiction, history, or travel across alternate realities.

If you'd like to read what other people on the CSFF Blog Tour are saying about The Bone House, you can find links to their blogs below.

I thought the characters were stronger too. I wonder if it's because we have seen the main ones now for two novels so know them better or if Mr. Lawhead knows them better. ;-)

Great to have you on the tour, Becca.

I also enjoyed the historical angle. Lawhead is a master at bringing the settings to life. Good review!

Rebecca-
I think it might be some of both. He's had more time to get to know them, and we have what we remember from the first book. I'm really glad it happened. :)
Thank you! The tour can be so fun. :)

Bruce-
He sure is! I always feel like I'm right there when I read his books. :)
Thank you!