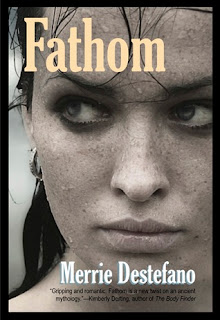 Wow! Every book Merrie Destefano writes is even better than the last. I loved the books she wrote before, but Fathom is unquestionably my favorite of her stories. The characters, plot, and world are all well-developed and they sucked me right in. I spent almost an entire day immersed in Fathom, and I didn't want to leave when it ended.

Fathom's characters feel real and true-to-life. They're complicated and fascinating, and their interactions are full of life and depth. I like that Fathom avoids cliches in the characters' relationships. Everything is fresh and more like real life in that nothing is black and white. Relationships in the book aren't simple, but they are more interesting and meaningful because of that.

I didn’t guess where the plot was going right away, which I always appreciate. I didn’t see revelations or twists coming until it was almost time or until they’d already snuck up on me. Nothing was predictable, but it all made sense when it happened. I love it when I find a book like that.

Merrie chooses just the right words to create a vivid atmosphere for Fathom. The story is full of magic, danger, mystery, beauty, and legend. The world Merrie has created for Fathom is just as rich as its characters. It was so fun to watch layer after layer unfold as the story progressed.

And because I almost always mention in my reviews who my favorite character was, for those who are curious, this time it was Caleb.

I immensely enjoyed Fathom, and I hope we get to further explore its world someday in more stories.

Fathom will be released as an ebook on October 1st.
Posted by Becca Johnson at 9:58 PM